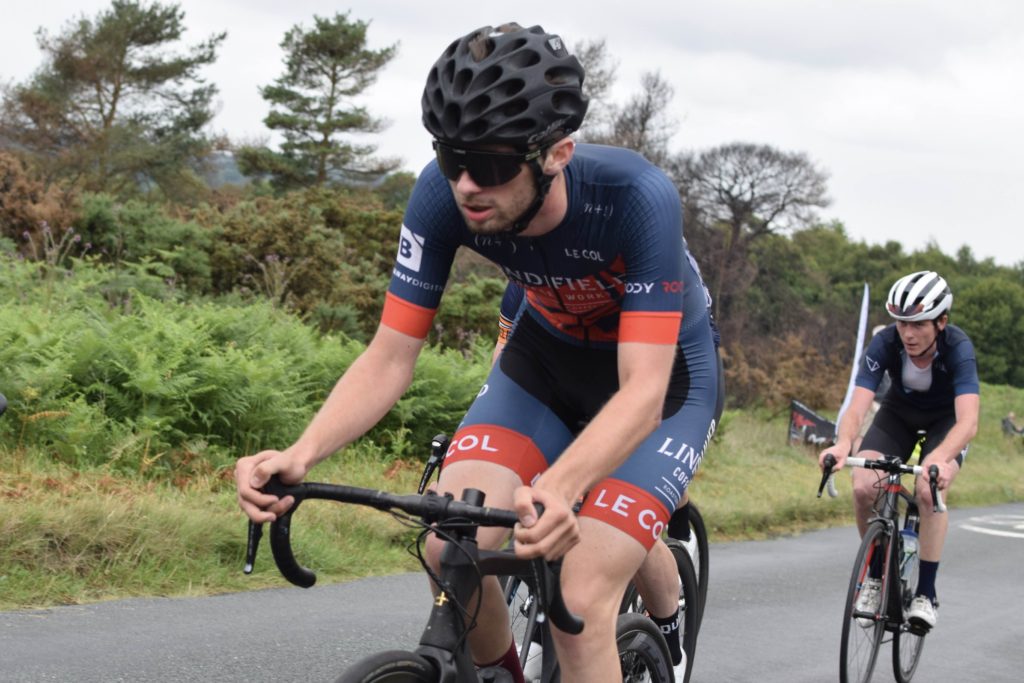 Recently I competed in the Tour of Sussex, arguably the hardest amateur stage race in the UK. Everyone turns up with fine form and legs firing on all cylinders. The organisers took no pity on the riders this year either with 5 brutal stages designed to break riders at every opportunity.

First up was a hot dog style criterium. By this I mean the criterium course is like a hot dog, the course is done on one road with two very sharp U-turns at either end. Now this may sound great thinking no technical corners, no road furniture, just two bends how bad can it be? To put it in perspective, imagine sprinting full gas for 20 seconds then recovering for 20 seconds and playing a game of chicken into every corner on how long you can leave it until you have to slam on your brakes only to realise it wasn’t late enough as 5 riders come dive-bombing up the inside.

After an hour of this madness the field was in pieces and there were only about 30 remaining in the front bunch. It was more a battle of survival, dive bombing corners, locking up brakes into corners and squeezing through gaps you wouldn’t think possible than the smooth peloton so often viewed from the side of the road. It was brutal but I think everyone breathed a sigh of relief having made it through safely. Both Matthew and I were comfortable in the front bunch until an untimely mechanical forced me out of the lead bunch. Ultimately we were very happy with our performance given the circuit did not suit our strengths.

The next day were two time trials, one individual and one with the team. The team time trial was around the Beachy Head circuit. A very well renowned course in the UK scene well known for its brutal coastal climbs and the weather that comes with being on the coast. The discipline is a very demanding and rewarding effort. Going as hard as you can while maintaining a smooth pace line, riding inches from the wheel in front and almost chewing your stem just to save valuable energy is an amazing feeling when you nail it. We emptied the tank and it’s quite often the smoothest team that go the fastest despite the effort it may look like some of the more ragid teams are putting in.
We performed exceptionally given the circumstances. With just two skinny climbers in the team compared to the 4 of other teams we were very pleased to be in the midfield with a time of 35:05 placing us 12th on the day.

The individual time trial is a whole other world. Again another full gas effort up the ditching beacon this time. The beacon is hard enough at the best of times, let alone when you’ve already physically exerted yourself to the max twice in the last 24 hours. Each corner ramps up to what seems like a never ending gradient. A brief moment of respite is only met with another ramp. As you see the famous horse sign toward the top you gather whatever strength you can from every muscle available and empty yourself at the top. I went that hard that it took me about 10 minutes sitting on the side of the road before I could lift my leg over the seat to roll back down. Again, we nailed the course with Matthew coming in 7th! I in 26th. It was amazing to see the level of roadside support we got as we went into deep dark holes towards the top. The cheering turned into a loud blur as all I could focus on was the top of the hill. It’s funny how you can find an extra gear when everyone is cheering you on. Can’t thank the team enough for all the support we received throughout the event.

With the riders exhausted from the 3 events in 24 hours up next was the Ladies mile Road race, a 70-mile road race on 15 laps of the circuit. It was a scorching day with temperatures touching the late 20’s. It was full gas racing from the start, riders eager to make up positions in the general classification and a chance at the stage victory. As each lap ticked by you could feel your legs pinching a little more each time on the long drag up to the finish. You can feel the peloton get nervier as the race goes on. Gaps get smaller, the pace goes up, the odd shoulder is thrown in order to maintain position and of course it gets faster. It became relentless with 3 laps to go. The break was within site and riders were flying left right and centre counter attacking. It’s different from most races where it’s hard, then eases, then hard etc. It just never eased up, always having to push on the pedals at tempo/threshold just to maintain position in the bunch. When the pace really got hot it was 50 riders strung out in one long line all hoping the rider in front was strong enough to hold the wheel and not leave you dangling off the back. We hit the finishing climb and fumbled over the line having survived another brutal day. Everyone was dreading tomorrow’s stage but I think we were both thoroughly looking forward to it knowing full well it would suit us the most.

There was an eerie sense about the last day of the tour, a lot of tired legs means a lot of opportunity to get a result. It was the infamous Kidd’s Hill stage with 10 times up the well-known wall of Ashdown forest. The race started as predicted, attacks flying, and a rapid pace. The reason attacks were flying was because the early break on stages like this are very often going to make it deep into the race. I managed to make the early break on the first two laps allowing me to climb the climb at my own tempo and save valuable energy for later in the race. Matthew was sitting comfortably biding his time for lap 3 when he got in the eventual break that would go the distance.

We summited the climb in 4:40 on lap 3, a time most hill climbers would be proud to do fresh, let alone after 4 stages. Each lap got harder but you just have to embrace the pain and enjoy it. I ended up in no man’s land after lap 6 when the yellow jersey decided he had enough and destroyed the bunch leaving it all in pieces. I was dropped by the front of the race containing about 10 members including team-mate Matthew.  I was dangling like a carrot in front of the peloton, but I figured I’d keep pushing because at this point nobody works together, it’s pretty much every rider for themselves. This led to 3 and half laps on my own to hold off the pack. Mile by mile digging a deeper hole, legs burning a little bit more. I enjoyed the pain after a while, telling myself to see how hard I could push my body before either my head gave in or I couldn’t physically push anymore. The last time up Kidd’s hill was in slow motion. I felt each and every pedal stroke and it will be engrained within me how hard I pushed that day. Again, the team were amazing on the side of the road, providing food, drink, cokes and words of encouragement each time I slogged my way up Kidd’s hill.

Matthew had an outstanding result finishing 3rd on stage and 4th on the overall General classification. We can be very proud of the way we rode as a team and of his result putting our small community driven team on the map. Massive thank you to all the sponsors for all the support, we couldn’t have done it without them.

On a personal note a massive thank you to all the supporters, organisers and martials as it was an outstanding event. Ran perfectly. Seeing fan’s and friends on the side of the road is a special feeling and it made me push harder than what I actually perceived possible.

I am already buzzing with excitement to enter next year.

Get the latest, breaking, team news